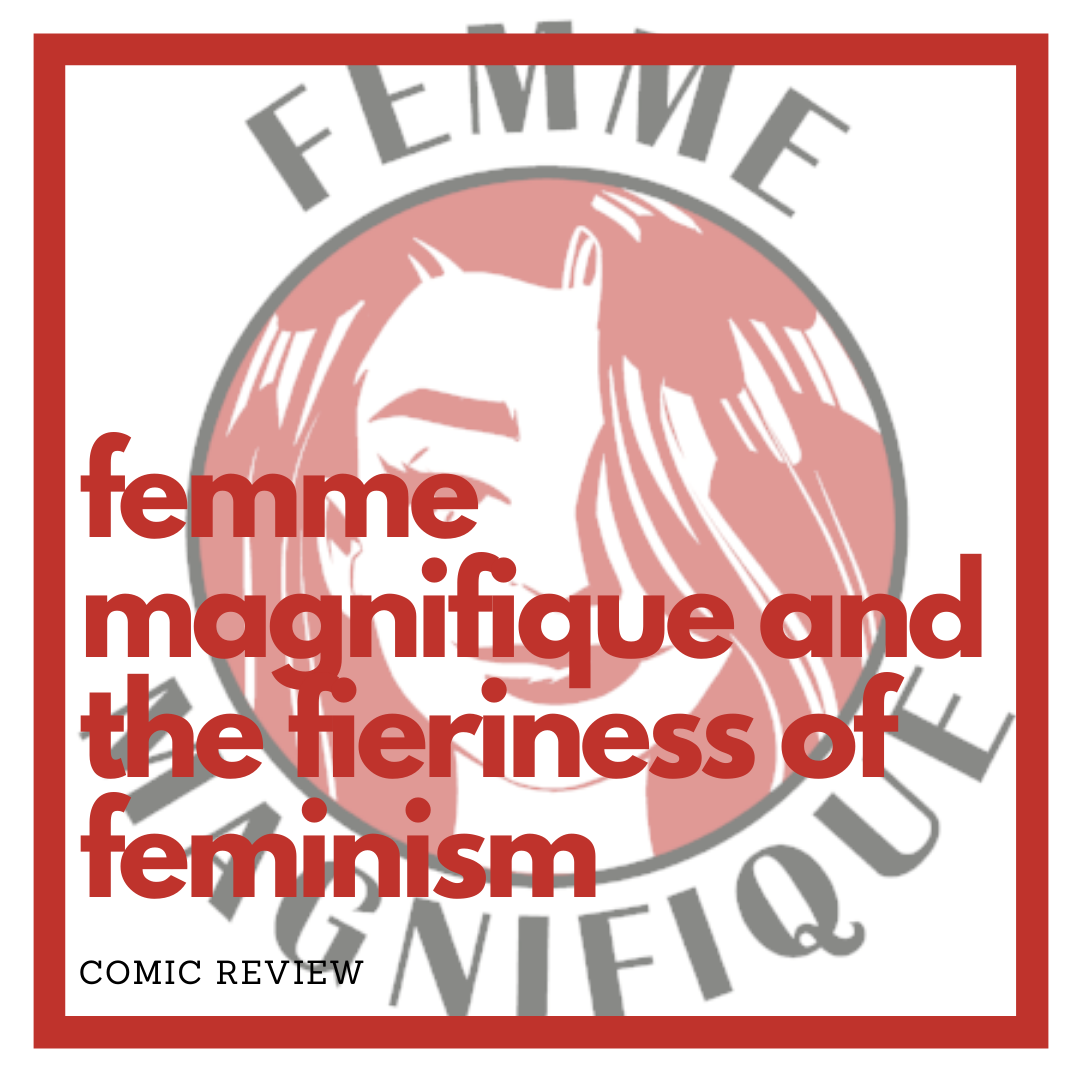 “When you are burned for what you believe, you are not ash—you are embers.” – Gerard Way

Before I could even make it to the table of contents, seeing the powerful faces of women like Ida B. Wells, Harriet Tubman, Shirley Chisolm, and Mae Jemison told me that I was definitely in the right place. Femme Magnifique was consciously curated for all of the women (and everyone else) out there who are tirelessly and consistently putting up the good fight.

As the legendary Cindy Whitehead states in the book’s introduction, “creating change is chaotic, messy, and downright hard.” And despite all of this, these women still took the first step and persisted until the rest of the world knew their names. We’d be remiss not to remember their names (…well most of them anyway).

Femme Magnifique touts itself as a ‘comic book story celebration of women, dreamers, and fierce achievers, glass ceiling crackers, fearless innovators of our history now and forevermore.’ Part mini biopic. Part personal inspiration. Femme Magnifique showcases women from all walks of life: artists, scientists, musicians, politicians (not my favorite category, but, hey, it’s there), athletes, revolutionaries, and many more. And while I found many familiar faces in this book, I also found many faces that I’d never seen before in my life. There were women in this book whom I didn’t know that I needed to meet, but wow, am I glad that we finally got the chance!

I won’t bore you with too many details because I want you to experience the book for yourself and pick out the most resonant women for you and your way of life, but I do want to name drop a few of the women in this book, so that you can have an idea of its range. Some of my new favorites include Kate Bush, Ellen Stewart, Artemisia, Brenda Fassie, Hatshesput, Ruth Kluger, Maria Bonita, and Ellen Armstrong. I could go into more detail about each of these spectacular women, but I think the book does it way better than I ever could.

I was also pleasantly surprised to see familiar faces like Octavia Butler, Misty Copeland, Judy Blume, Rumiko Takahashi, Hedy Lamarr, and Carrie Fisher. And there were even some familiar millennial faces like Kat Blaque, Abbi Jacobson, and Ilana Glazer, as well. I had to side eye the stories praising Hillary Clinton, Margaret Sanger, and Michelle Obama, given their histories, but, hey, to each their own!

For the most part, I thoroughly enjoyed this book. It was an exciting read from start to finish (…even if I did have to spend half of my time looking up the woman I’d just learned about before I could continue on to the next woman’s story, but I digress). Perhaps this book is better off being read a story a day, rather than binged all at one time. I could see it as a cool way to learn about 50 different women for 50 days, like one of those daily challenges on Instagram, or something. I bet the stories would also have more time to sink in that way.

Aside from the stories, there are also a few essays, photos, and concept art spread throughout the book as well. There’s even a place to make your own comic in the very back! Since this book was originally created as a Kickstarter project, I’m sure its backers received a lot of cool tiered items when they helped fund the project. I’m always down to support an awesome Kickstarter campaign.

I love collaborative projects like this because of course things are better when we do them together, and in a massive project like Femme Magnifique, you’d be hard pressed not to find a favorite art style by the time you’re finished reading. I quite enjoyed them all, and I also enjoyed that the last few pages of the book took the time to highlight and humanize the people that worked so hard to make this project happen, including fun facts like their likes and dislikes and their pictures. It was so much better than just seeing a faceless name in a list of credits. It also gives you a springboard to jump into their other works if you enjoyed the stories that they worked on, and I promise if you have ever read at least one comic, you will defintely recognize somebody in the credits. I promise.

Femme Magnifique is an ode to 50 women who have forever branded their place in history (for good or bad), and it’s a book that can be revisited time and time again. If you have the time, I highly recommend that you give it a try. You’ll be glad that you did.

And to close out my review, I’ll leave you with a quote from Lydia Lunch, one of the many women mentioned in this comic anthology, on the importance of women finding pleasure in this trying and energetic world.

“A point that is within everything I do is that, in times of war—and it’s always a time of war—women especially need to seek out more pleasure. Because it’s the first thing they steal from us and it’s exactly what their fear campaigns intend to steal from us—you never have a moment’s peace or pleasure.” – Lydia Lunch

So for all of my women out there, never let the world take away your joy. You deserve it and so much more. Be well.

One reply to “femme magnifique and the fieriness of feminism”